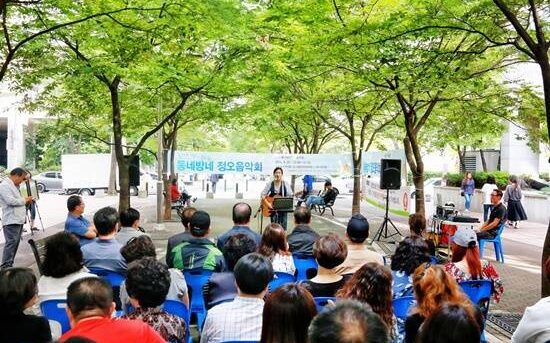 On the 22nd, Ilsan-dong-gu, Goyang-si (Chairman Lee Gyeong-jae) announced that it had held a ‘Neighborhood Room, Noon Concert’ at the invitation of the Baekseok 2-dong Residents’ Committee on the 1st and 2nd road between the Dongmun Good Morning Tower in Baekseok-dong opstar town.

At the concert, singer Hee-won Song sang songs such as ‘Don’t Worry My Love’, ‘Autumn Love’, and ‘Autumn in front of the post office’ by singer Jeon In-kwon, giving the office workers a time of healing using their lunch break. Along with the concert, a photo street exhibition of Ulleungdo and Dokdo by Kim Jeong-ho, director of Goyangji, was also held.

A resident of Baekseok-dong, who saw the performance, said, “It was a wonderful time to remember the fall of 2016.”

An official from the Industrial Hygiene Division in Ilsan-dong-gu said, “This ‘Neighborhood noon concert performance was made by Ilsan-gu Office, which hosted the performance, and the Baekseok-dong Residents’ Autonomous Committee provided a street stage frequently used by residents.’ It is becoming an exemplary case for visiting cultural performances to provide opportunities.”